Grant Shapps has announced that travellers who have had both vaccine doses can skip quarantine requirements when returning from countries on the amber list.

The new rules — which come into effect at 4am 19 July — only apply to those arriving in England who have had their jabs as part of the UK’s vaccine programme.

Arrivals would also be exempt from taking a PCR test on the 8th day following their return to the country, but would still be required to take tests prior to and two days after their return in line with the rules for green list countries.

And under-18s arriving in the UK will be able to skip quarantine requirements in line with full-vaccinated adults, Shapps added.

People taking part in UK-based vaccine trials are also exempt, and the government says it hopes to open up quarantine-free travel to people vaccinated in the US and EU later this summer.

TRAVEL UPDATE: From MONDAY 19 JULY 4am #British fully vaccinated adults will not need to isolate from amber list countries 🚦 including those on clinical trials – another step to fully reopening international travel. Children under 18 will not need to self-isolate.

The guidance discouraging travel to amber list countries is set to be lifted later this month, meaning people are welcome to travel for “leisure, bisiness and to see family”.

“As one of the world’s most vaccinated countries, we must use these advantages to restore many of the freedoms that have been necessarily lost over recent months,” he told MPs.

Shapps continued: “Thanks to this government’s incredible success with the vaccine programme, people in England will be able to travel more easily, visit their family and friends who they’ve not seen for such a long time, and also get business moving again, kickstarting our economy while keeping the UK safe and supporting a wide range of jobs and industries in the process.”

“We must use these advantages to restore many of the freedoms that have been necessarily lost.”

Under the government’s traffic light system for travel, anyone arriving in the UK from amber countries must currently quarantine for 10 days and pay for Covid testing at their own expense.

The vast majority of countries are in this category, while around 30 destinations are on the countries green list, and 10 are on the red list.

Arrivals from green list areas only need to quarantine if their mandatory Covid-19 test after their return is positive.

Travel to red list countries — which includes India, Pakistan, Turkey, Brazil and South Africa — is banned “except in the most extreme of circumstances”. Anyone returning from these places must quarantine in a government-approved quarantine hotel, which costs £1,750 for per adult. 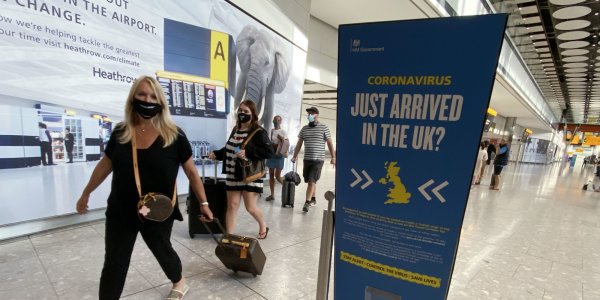 Shapps said the changes on 19 July would bring amber list countries in line with green list countries, but warned that the former “could still turn red, necessitating a change in behaviour.”

Passengers arriving from amber list countries will be able to prove their vaccination status using the Covid pass built into the NHS app, or by obtaining an “accessible letter” if they do not have a smart phone.

But they will still be required to pay for testing at either end of their trip, which Labour’s shadow transport secretary would “turn away would-be travellers”.

“The Government could stop the rip off we see from private testing companies, using fair capacity in the NHS testing sites, supported by an updated NHS app,” Jim McMahon said.

“We know testing is a critical element of preventing the spread of Covid, but will he take forward these suggestions and finally make meaningful progress.”

But Shapps responded that tests were tests “as inexpensive as a tenner” and that there are “quite a number of tests available now for much lower prices than were previously stated”.

← Is Boris Johnson Playing Favourites With The Metro Mayors? British para athletes make history to end our extraordinary sporting summer on a high →